A borescope (occasionally called a boroscope, though this spelling is nonstandard) is an optical device consisting of a rigid or flexible tube with an eyepiece or display on one end, an objective lens or camera on the other linked together by an optical or electrical system in between. The optical system in some instances is surrounded by optical fibers used for illumination of the remote object. An internal image of the illuminated object is formed by the objective lens and magnified by the eyepiece which presents it to the viewer's eye.

Borescopes are commonly used in the visual inspection of aircraft engines, aeroderivative industrial gas turbines, steam turbines, diesel engines, and automotive and truck engines. Gas and steam turbines require particular attention because of safety and maintenance requirements. Borescope inspection of engines can be used to prevent unnecessary maintenance, which can become extremely costly for large turbines. They are also used in manufacturing of machined or cast parts to inspect critical interior surfaces for burrs, surface finish or complete through-holes. Other common uses include forensic applications in law enforcement and building inspection[1], and in gunsmithing for inspecting the interior bore of a firearm. In World War II, primitive rigid borescopes were used to examine the interior bores (hence "bore" scope) of large guns for defects. 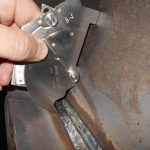 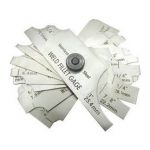